What is the Difference Between IDS and IPS? 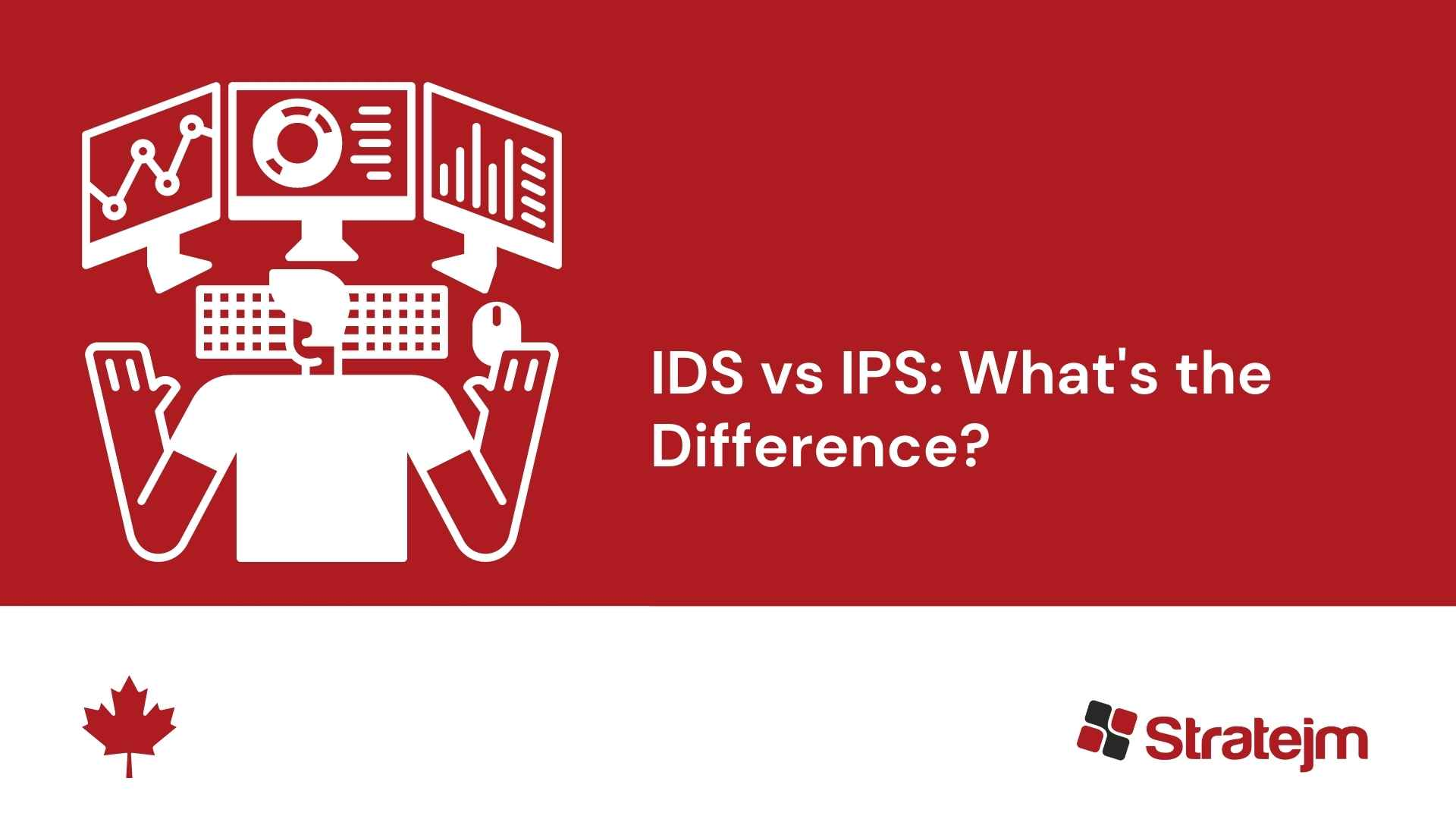 What is the Difference Between IDS and IPS?

IDS or IPS? If you are an IT professional, chances are you’ve been asked this question at some point in your career. Both systems have their pros and cons, and if you’re not sure how to answer, you are not alone.

Both systems are an integral part of network security, and include concepts that should be considered when creating IT strategy.

In this article I will dive into the concepts behind IDS And IPS and provide a quick overview on what you need to know:

What is an Intrusion Detection System? 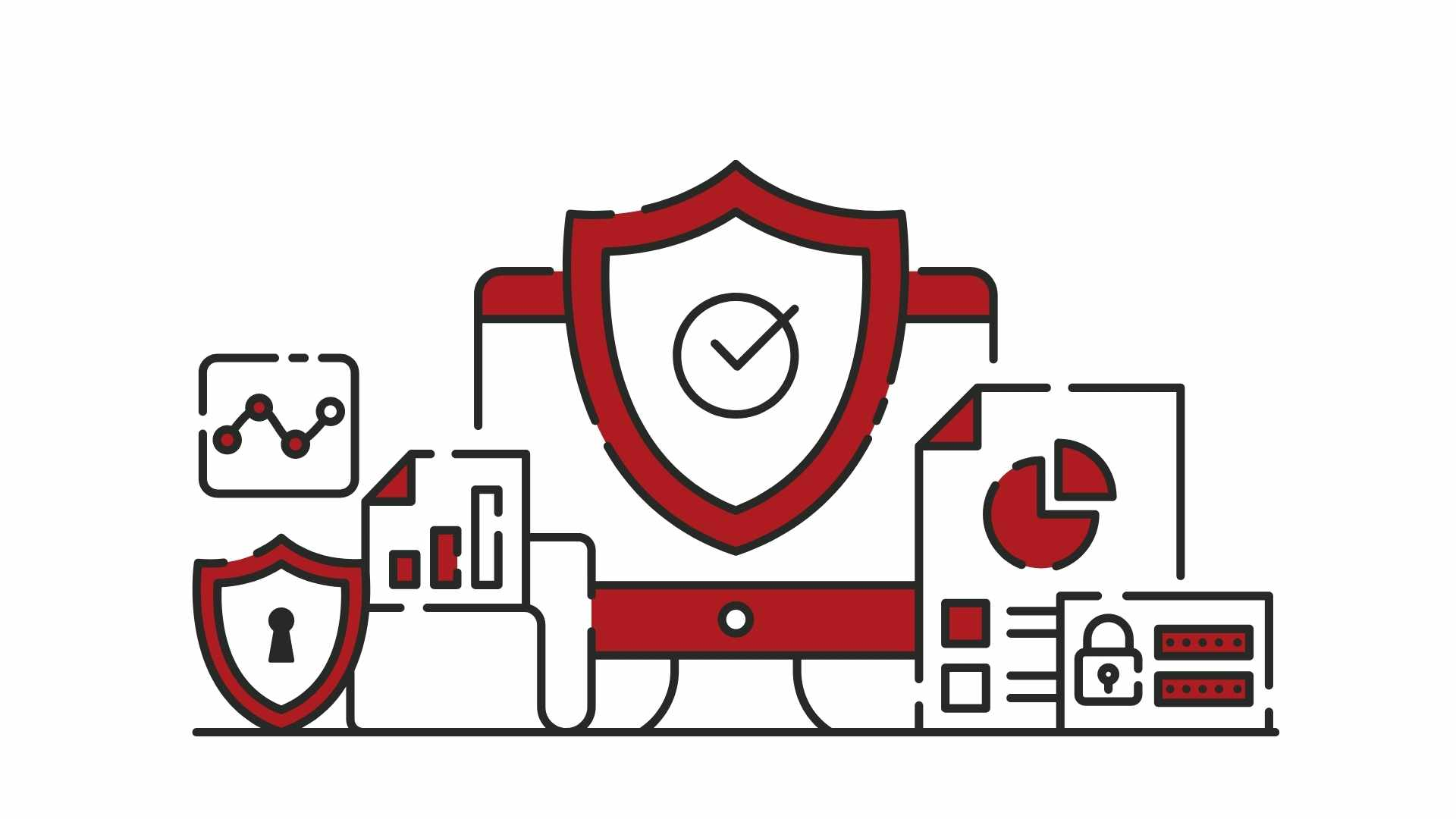 An intrusion detection system (IDS) is a platform that monitors your network traffic for suspicious activity, including malicious acts, violation of security policies and security threats. It is important to note that IDS does not typically take any action – instead they are designed to notify network administrators who then determine what happens next.

There are several types of intrusion detection systems that employ different detection methods:

A network based IDS monitors all packets moving in and out of a network. These systems can be used to monitor all traffic on a network, or just a small subset. These are used primarily to monitor and analyze network traffic to protect a system from network-based threats.

A Host Intrusion Detection System (HIDS) does the same thing as an IDS, but lives on and monitors a single host (i.e a computer or endpoint). This also brings the capability to monitor the activity of clients using the computer – If the HIDS detects any changes or suspicious activity (i.e someone violating security policies), within a host, it can quickly alert an administrator to the issue.

What is an Intrusion Prevention System (IPS) ? 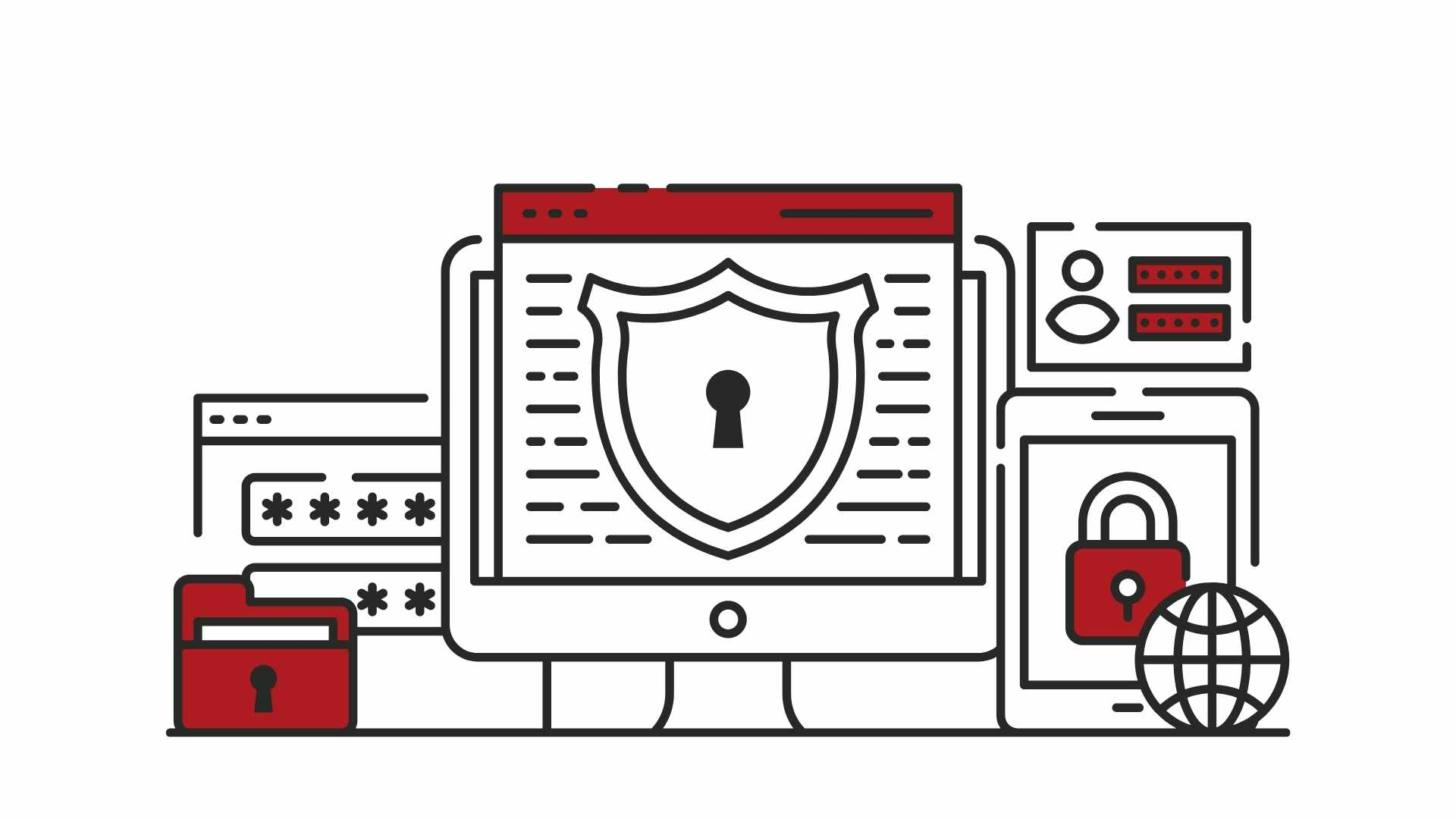 An intrusion prevention system (IPS) is a platform that scans network traffic content to detect and respond to malicious behavior. Unlike an IDS, however, IPS systems typically come with automated responses that will block a traffic source, drop malicious traffic, and send alerts to the user.

Much like a NIDS, a Network based intrusion prevention system will cover and respond to all the events in your network. These typically use a signature based detection method.

Like a NIPS, a network behaviour analysis tool will provide network-wide coverage. The main difference between the two is that an NBA system will deploy a different detection method, typically using anomaly detection that determine network baseline norms and risk factors. 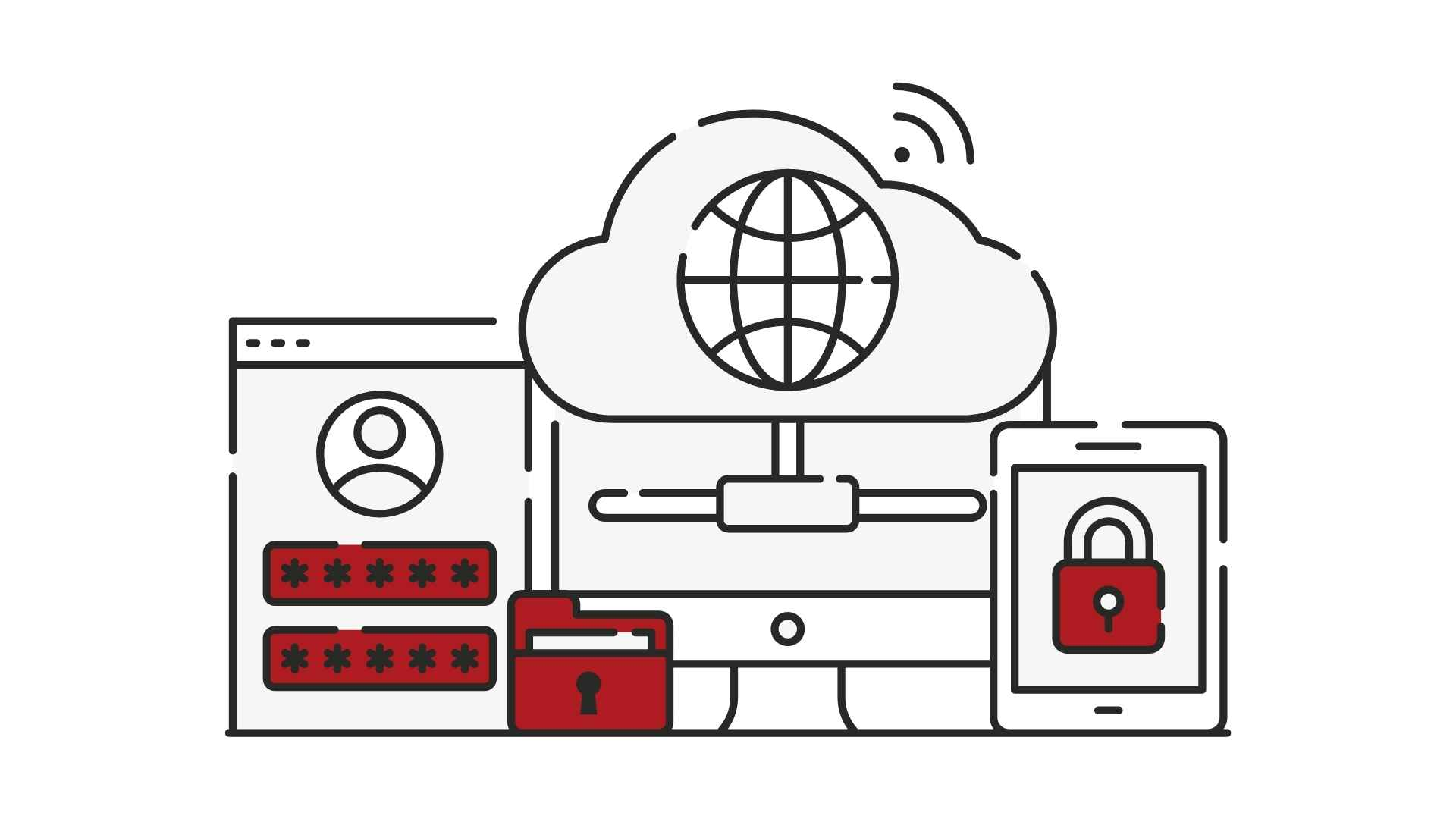 Signature based detection methods rely on a preprogrammed list of known attack behaviours that match those of known threats. These “signatures” can range from things like subject lines in emails to remote logins to certain byte sequences.

These systems are excellent for identifying established, less sophisticated attacks, but are ineffective when it comes to zero day attacks, which do not match any previously known signature.

In order to deal with increasingly sophisticated cyber threats, security teams have begun to incorporate Machine Learning (ML) and Artificial Intelligence (AI) into their tools. An anomaly based monitoring system begins with a model of normal network behaviour and alerts an administrator any time it detects a deviation from the baseline network level.

These systems have ultimately proven much more useful than signature based ones as they are much better at detecting and recognizing new threat data. However, a downside is that they can set off many false positives since they can sometimes benign anomalous behaviour for an attack.

IDS vs IPS: Which is Better? 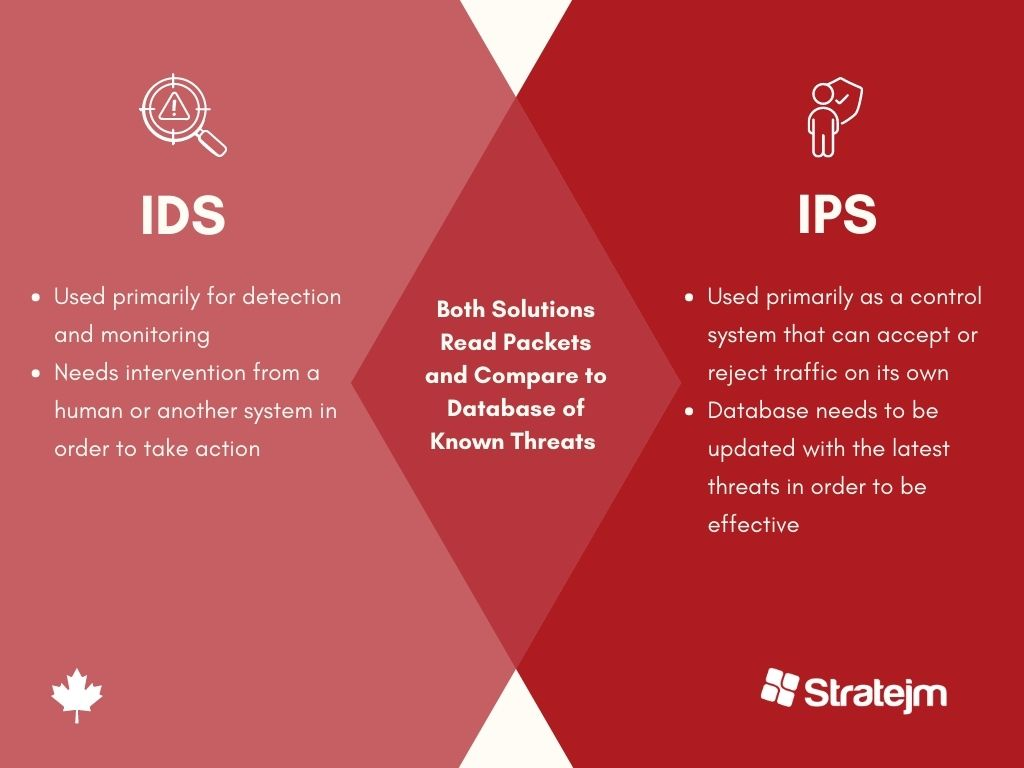 At first glance, IDS and IPS systems would appear rather similar – both tools monitor traffic and compare the contents to a database of known threats and malicious traffic.

Where the primary difference is, however, is what happens when malicious traffic is detected. IDS systems are monitoring tools that are not able to take action on their own, while IPS systems are capable of taking action and rejecting a packet based on a set of rules.

Additionally, IDS solutions require more human intervention. These tools do not take any action on their own and therefore require a human or another system to look at the data and determine what happens next. For this reason, IDS systems typically make better forensics tools for use as part of security investigation

IPS systems, on the other hand are a control system intended to catch dangerous network packets and prevent them from reaching their target. This is where they have an edge – IPS systems can identify and block attacks in real-time using a preconfigured set of playbooks that execute automatically in the event of a security incident. These automation capabilities ultimately make IPS the much better solution when dealing with security policy violations.

IDPS: IDS and IPS Coming Together

While both IDS and IPS are important parts of any cybersecurity system, it is important to understand that they are two different technologies with differing purposes. However, there is much overlap between these two systems which means they are often used together.

In fact, many organizations deploy both IDS and IPS software, scrapping the IDS vs IPS debate alltogether. For example, a company might use IPS as one of its active network security tools while using IDS to gain a deep understanding of how traffic moves across your internal network.

This would allow you to keep your entire network and system safe, but also avoids letting any attack go unnoticed.

Many modern vendors use a combination of IDS/IPS and Next Generation Firewall. This framework is generally referred to as Unified Threat Management.

How is IDS/IPS Different From a Firewall?

A traditional network firewall is designed to limit access between networks to prevent intrusion but do not defend against attacks from within the internal network. Next generation firewalls combine this technology with deep packet inspection.

IDS and IPS systems, on the other hand, take action when they suspect intrusion from within the network.

Why is IDS and IPS Important for Cybersecurity Strategy? 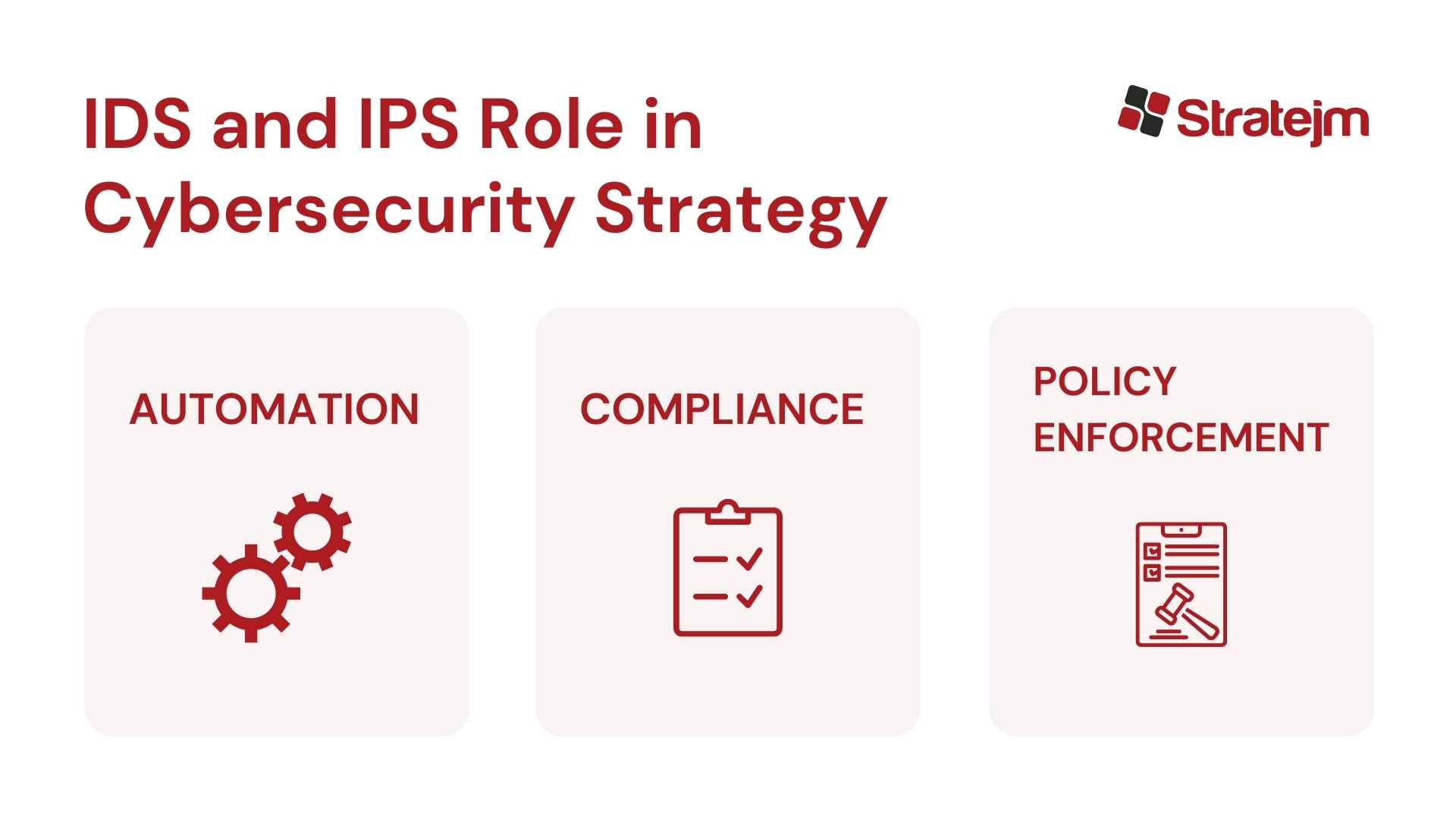 IDS and IPS systems are an important part of any network security system because they can proactively identify cyber attacks that would otherwise cause harm. Security teams are already overburdened and so IDS/IPS systems serve to cover specific and important areas of a network infrastructure.

Here are some key reasons why IDS and IPS are important for unified threat management:

How to Choose an IDS or IPS system

Before going out and spending as much as you can on the most advanced IDS or IPS you can find, it is worth taking note of what your goals and capabilities are. Consider what assets need protection and how the solution will integrate into your broader security systems.

Your first decision will probably stem from choosing between an IDS or IPS, and ultimately your decision should boil down to whether you want a passive or active defensive solution.

An important aspect not to overlook is the configuration and integration of the IDS and IPS. Just because you have purchased the latest and greatest does not necessarily mean it is fine tuned for your specific environment. They need to be carefully configured and integrated into your operating environment so that you can avoid problems like false positives.

For this reason, it is recommended that you seek assistance from an experienced managed security services provider like Stratejm, who can help ensure that your tools are configured and maintained properly.

While there are many similarities between Next-generation firewall and IPS, there will still be a need for IPS in cybersecurity strategy. No matter how strong a firewall is, some malicious traffic will always get through, which will mean that the IPS will always be necessary as a second line of defense.